So hello, fellow wanderers in the endless blog-o-space.

I'm kind of new to the whole blogging thing...but my main goal with this one is to post my knitting projects, get some feedback from other knitters (hopefully) and esentially grow into a more established knitter.


I've recently been trying my hand at making my own patterns....which is quite difficult, given that I have the attention span of a small insect and can barely finish projects ever without starting a few thousand others. However, I have finished one; it's far from perfect (the seaming looks like total crap and the pieces are nowhere near even, but black wool is oh, OH so forgiving.) This purse was quite simple, and was my first attempt at faire isle knitting. 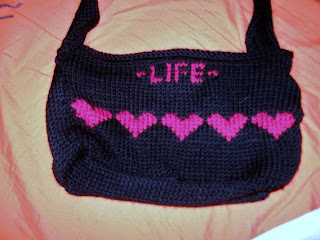 To answer your question: no, I don't throw swords when I'm feeling good.

This is the other side, for when I'm feeling drained: 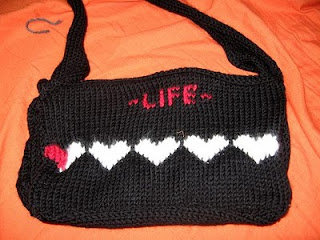 and here it is modeled. All hail the master spoon. 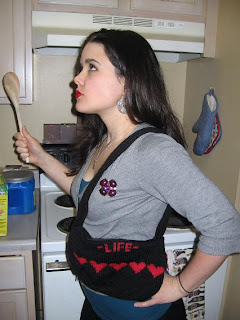 Honestly, aside from the color work, I mostly "winged it" on this pattern. For the hearts and the "life" symbol, I sketched out a color chart on some graphing paper and followed it. I jotted down the beggining plans for the bag (for the record, it was CO 54, but I added a few stitches on each side when I deciced the bag ended up being too small) The strap I totally forget how many it was. My boyfriend and I were watching South Park reruns and I wasn't paying full attention.

I was, however, paying attention enough to get the bare bones basics.

The purse is worked with:

knit entirely in stockinette. A ton of tweaking was done after the bag was blocked and sewn together, so it turned out much smaller than I had anticipated.

Even though this purse is far from perfect, I still find it all kinds of awesome. If I could do it all over again though, I would choose a more sturdy fiber than wool for this bag...perhaps a tweed...something stiff that won't stretch as much when it holds something heavy.