I am seduced by
the warm blankets and sweet dreams.
My bed, my haven.

Posted by Orb Weaver at 8:20 PM No comments:

I'll Be Seeing You!

Well, Readers, now that it's official, I guess I can finally share the good news:

I have been invited to perform with the Seattle Radio Theatre. I will be singing with this amazing group of actors on December 21st! The radio play will be broadcast over AM 1090 KPTK at 8 pm!

The jury's still out on whether or not my contribution to the show (I will be singing before the radio play starts) will be broadcast over the radio. All the same, this is a tremendous honor!

There is a veritable MOUNTAIN of things I need to prepare for; I need to practice, update my headshots (my last semi-professional headshot was taken when I was 17), practice, drag out my old keyboard, practice, meet with the director and accompanist, practice, pick up a black evening gown, and oh yes, practice.

In all seriousness, I find that my mental state is fluctuating between pure euphoria and sheer terror. I haven't sung in front of a paying audience since I was 19, and even then, I was singing in a choir, not as a soloist. It's true, I constantly worry about making a fool of myself. However, I've come to accept that worrying about something is just about as effective as trying to do my laundry by playing Words with Friends.

Wish me luck, Readers! And tune in!

Posted by Orb Weaver at 7:39 PM No comments:

I would like to apologize for the distinct lack of crochet patterns as of late; at the insistence of my husband and friends, I've put myself on a  crochet pattern "sabbatical" until after Thanksgiving. I've got a few things in the creative crock-pot stewing away though, so you guys can look forward to lots of new stuff in December!

Plus, I just got some very, VERY exciting news and an unbelievable opportunity! I'll give details when I can, but for now, it's taking every ounce of my self control to not start squealing and jumping up and down like a two year old.

I ended up selling about half, that's right, HALF of my merchandise. Friggin awesome.

Even though (compared to last year's disaster) this year was quite a success, I still learned quite a bit throughout the whole thing:

1. Presentation, presentation, presentation. As I'm sure my regular readers are aware, my "doitatthelastpossibleminute" strategy had given me disastrous results last year. This year, I took the time to scour the discount and secondhand stores for various decorative items; I found a nice chocolate brown tablecloth (that I could use for myself after the craft fair was over), a couple of FABULOUS golden poinsettia place mats, and an earring holder that rotated, all for about twenty dollars.  I commandeered our dining room table for an evening and played with different "layouts" until I was satisfied, and on the morning of the fair my booth was up and ready to go within ten minutes.

Plus, you guys, look at this price tag. Look. 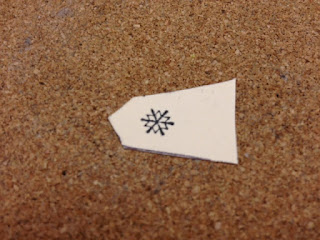 I made my own price tags by cutting out tag shapes from a blank manilla folder and stamping them. So cute, fun to make, and in my humble opinion, much nicer looking than the store-bought ones.

You'd think that presentation would be obvious to a gal who sells her things at craft fairs, but making my flakes stand out and look their best is something I really struggle with. I'm sure that some of you who follow my "Lace Doodle Thursdays" have noticed my lack of photography skills; I find that white crochet snowflakes are VERY hard to take pictures of! Granted, taking pictures of my snowflakes is an entirely different animal than setting up a craft fair booth, but making things look good (in pictures AND in person) is a skill I am continuing to develop. The best way to learn these things (in my case) is to fall flat on my face a few times; but as the proverb goes, from last year's mistakes come this year's wisdom. My booth looked SO much better than it did last year, and all the effort I put into the presentation of my flakes really showed itself in the increased sales!

2. Pricing. My prices this year came down quite a bit, mostly due to the fact that I worked really hard to silence my inner yarn snob. The vast majority of my flakes were made with DMC's "Cebelia" (which goes for about five dollars per ball; I ended up using one ball to make around 40 snowflakes. On average, the cost of materials was about twelve cents per flake. Given that I paid about fifty cents per snowflake last year, this is an amazing improvement) and a few were made with some inexpensive beads. The most expensive snowflake was about five dollars (it didn't sell, but I kind of wanted to keep that one anyway).

Most of the snowflakes sold were priced between $2-$3.50 each. It was interesting; the customers gravitated toward the medium sized flakes instead of the itty-bitty ones (priced at a dollar) or the lager and more complicated ones (priced between $4-$5). I like having a variety of shapes/sizes to sell, but knowing what the customers usually buy is always good to keep in mind.

3. My attitude. The fabulous legal secretary who runs the craft fair (and who was been running it for the past ten years) gave me some really solid advice after she witnessed my little "craft sale fail" last year: to RELAX! Nobody sells all of their items, nobody gets it right the first time. Customers are able to detect desperation like a rabbit can detect a ravenous wolf, and potential buyers will high-tail it in the opposite direction as soon as they hear an over-enthusiastic "OH, HI!!! WOULD YOU BE INTERESTED IN SOME HANDMADE CHRISTMAS DECORATIONS???"

I made it a point to avoid the craft fair as it was going on, with the exception of my noon break (where I went to re-arrange the booth and put out more merchandise). I know myself enough to anticipate my tendency to come off as a bit high-strung when I'm stressed out, so for the majority of the day, I stayed in my office. I will say that it was hard, SO hard, but the end result made it all worth it.


Because, you know, it's a really good idea to NOT circle around potential customers like a shark.

With that, I'm out, Readers! I hope you all have a safe and wonderful Thanksgiving!

Posted by Orb Weaver at 8:00 PM No comments:

Repose is breathing
Deep, when my Soul has been freed
From the tightn'ing vice

Posted by Orb Weaver at 7:45 PM No comments:

Why does nobody
Remember when Fabio
Got hit by a goose?

Big things are going on; so I'm afraid that I'm going to have to put my weekly lace doodles on hold for a little while.

In the meantime, please enjoy this picture of a baby alpaca: 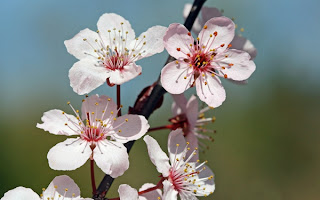 I love cherry blossoms. So cheery and delicate!

This weeks' flake is an homage to one of my favorite flowers: 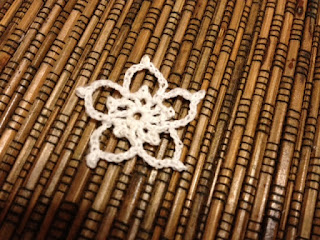 The flake shown above was worked with DMC crochet thread size 20 and with a .9mm crochet hook.

bind off, weave in ends, starch.

You know the drill, crocheters; You can do whatever you like with the flakes you make from this pattern. However, please do not change or sell the pattern itself (but feel free to share it all you like!) :-)