To my Dad, who hates the Care Bears


Ah, Father's Day. A day to celebrate fathers and fatherhood.

I hold countless memories of my Dad: afternoons spent fishing on Lake Julia, ridiculously long road trips, the failed experiment that was smelt spaghetti sauce (don't ask).  But, one of the most striking memories I have of him during the early years of my life was the intense white-hot loathing he had for the Care Bears.

My first memory of my father's Care Bear hatred stems from way, WAY back in the day; back when my family lived in central Wisconsin. I think I was between the ages of 4 and 5 at the time.

Before we dive deeper, Readers, some background:

I was born into a very, VERY large family. I have nine aunts and uncles on my fathers' side, and five on my mothers'. I have an army of cousins, and most of my extended family lived within a two hour drive of one other. I have to say that this was FANTASTIC growing up! I was never a lonely child, since all of my aunts, uncles, and cousins were present for nearly all of our major life events.

So, when we found out that one of my older cousins was about to give birth to her first child, my parents packed us up and we drove to Rhinelander (my cousin, her parents, and my Grandparents live there) so we could be present when the baby was born. EVERYBODY on my Dad's side of the family was there!  The older family members decided that we, the younger cousins, might be a bit too overwhelming if we were to visit the hospital (plus, many of us  were too...impressionable to witness the miracle of life),  so we congregated at my Grandparents's house while we waited for the new arrival.

And it was then that my father's hatred of the Care Bears began.

A few of the older folks stayed behind in order to keep an eye on us munchkins. I think that there were around eleven of us little ones who stayed behind. My Dad was the only adult that I distinctly remember being present, along with a few of my uncles/aunts. Dad opted for phone duty; staying awake by my Grandmother's phone (this was before cell phones were a thing), waiting for news.

Since the weather was too cold and wet for us to play outside, we watched videos. And the only video that my Grandmother had at the time was this:


As my cousins and I sat there, mesmerized, in front of the TV, the fact that my father had only gotten about an hour's worth of sleep within the past day and a half started to manifest in his ongoing commentary on the film. I don't remember the exact words he used, but I remember quite a few of the things in the movie that he thought were just WRONG:

"Where on Earth are the camp counselors? Why don't the kids go to an adult if they keep on getting picked on?"

"What's the Care Bear Stare? Is that like a laser beam or something?"

"So...the just...care? Do they ever DO anything about whatever it is they care about?"

This went on and on.

The last straw for Dad was the...shall we say...climatic ending.

Again, I don't remember the exact words he used. It's been way too long. But I do remember my Dad turning the movie off, loudly proclaiming something to the effect of "This is the stupidest thing I've ever seen," and launching into a lecture about how "Caring about something won't ever solve your problems if you don't do anything about it."

That lecture lasted the whole afternoon, and the whole car ride home.

The above memory might seem like nothing more than the goofy memory of a frazzled 30-something projecting his exhaustion and grumpiness onto a bunch of candy-colored anthropomorphic bears, but I don't see it that way.

It was on that day that my Dad planted a seed in my brain, a seed that has grown into a skill that has served me well.

Through his hatred of the Care Bears, my father had unintentionally shown me the face of critical thinking.

Dad, throughout the years, you have taught me many things, and lead me to many wonderful places. You have always been there for me, and I have learned how to be a better person by simply watching you.

Even when you're hating on the Care Bears.

I love you Daddy! 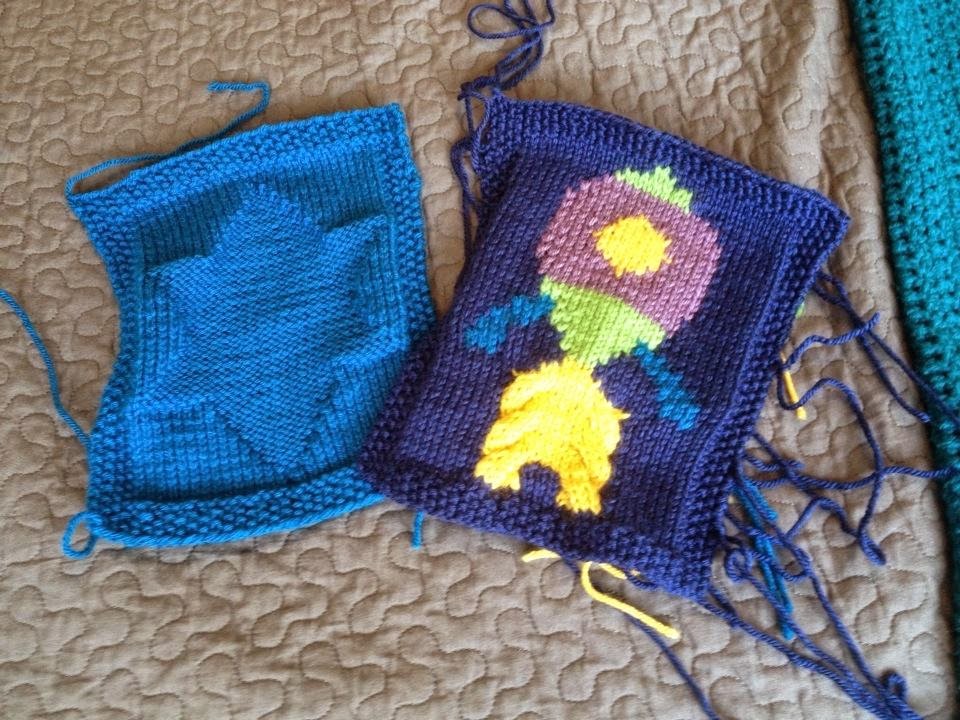 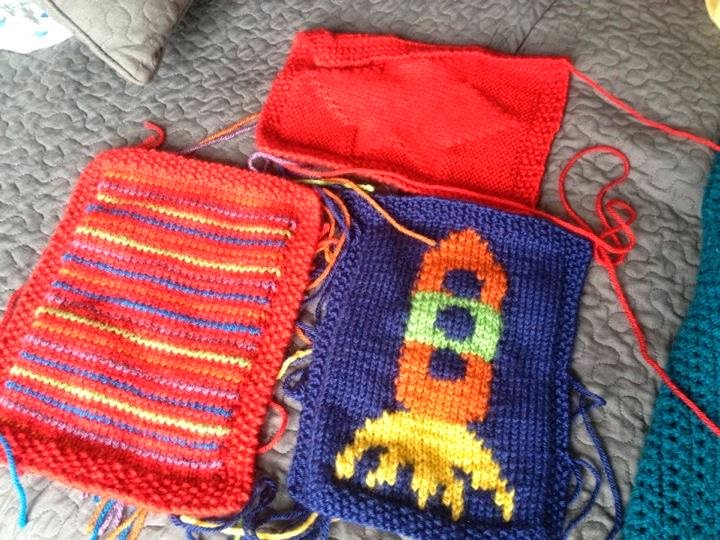 I bought a spectacular knitting pattern book a while back called Knits of Tomorrow, by the very fabulous Sue Culligan. The patterns designed here are delightfully retro-nerd!

My favorite of the books' patterns is definitely the Starship baby blanket: http://www.ravelry.com/patterns/library/starship-afghan

I love this pattern so much, I'm knitting it even though there aren't any behbehs in my foreseeable future! Plus, I'm going to enter this adorable thing into the Washington State fair as soon as it's finished.

I officially registered myself as an exhibitor this morning. It was super easy and FREE, as well!

When the judging is all done, I'm going to send the Spaceship Blankie to a high-school buddy of mine, who just had a baby boy. <3

It's been a while since I've done real intarsia work. I know I like to talk about intarsia in the same way an adventurer would talk about fighting a fire-breathing dragon, but in all honesty, the technique is much simpler and straightforward than I like to think. I might need to re-do the orange/green rocket ship because I over-thought it and made my intarsia links WAY more complicated than they needed to be; as a result of my stubborn "I can do this, no need to look the technique up!" mindset, there's a small row of green/orange lines along the left side of the patch (right where the orange/green meet the dark blue).

I've got six patches finished, and ten left to go!

Until next time, Readers!

I'm Angry. Sad. Fazed.
But, I do not feel Surprised.
That terrifies me.

http://www.komonews.com/news/local/Police-respond-to-shooting-near-Seattle-Pacific-University-262043001.html
Posted by Orb Weaver at 8:00 PM No comments:

Look what I finished:

I've been wanting to make a crochet lace parasol ever since I saw these patterns pop up on Ravelry. I think this is the largest piece of lace that I've ever made!

The pattern itself is fairly simple (pineapple lace is quite easy, just single crochets and chains, mostly), but the actual crochet/construct process was a bit of an adventure:

I had to find a cheap stick umbrella to sacrifice to the cause, and I ended up finding a cheap one for sale at Daiso Japan. Cost me all of $1.99!

And because the umbrella base cost me all of $1.99, getting the lace on the umbrella skeleton was...interesting.

The instructions included in the crochet pattern gave some simple instructions for breaking down the sacrificial umbrella: according to the designer, just cutting away the fabric and saving the tips from the ribs would do the trick.

My umbrella would not give up its fabric without a fight.

There was a circle of tightly folded blue nylon underneath my umbrellas' ferrule that simply would. not. budge. I must have spent about a week fretting over how to get the fabric out without completely destroying the umbrella base; but about an hour and half of constantly cutting and picking at it with my pinking shears and tweezers eventually got it to slide off.

Now that I know that I CAN make this fabulous thing...I'm going to make it again! As happy as I am with the parasol, I want to make another one to enter into the state fair in September!

Parasol 2.0 is going to be classed up a bit! Can't wait to show the results!

Until next time!
Posted by Orb Weaver at 5:04 PM No comments: