Haiku Friday. It's bigger on the inside.

There are some days when
I wish I could just up and
go with The Doctor.
Posted by Orb Weaver at 9:03 AM No comments:


Some people have morning rituals, Readers. I have a lunch hour ritual.
Every day at 1pm, I take the sandwich I packed for myself out of the employee fridge, turn my phone off, hang my headset over my computer monitor, and listen to NPR.

Yes, Readers, the writer of this blog listens to NPR. A lot. Since I'm too cheap for cable TV, public radio and PBS are how I usually get my fill of the news/politics/entertainment/whatever.

An interview with Peggy Orenstein on "All Things Considered" piqued my interest. Orenstein was talking about her latest book, "Cinderella Ate My Daughter," in which she discusses the growing trend of what she calls "Princess-Mania." She also explores the possible causes of it, and the potential ramifications of the mountains of pink merchandise being aggressively marketed towards young girls.

At first I rolled my eyes. Hoo boy. Leave Cinderella alone, lady. Ugh, this is just like that horrible Psychology of Women text book from sophomore year. Blame gender inequality and discrimination in the work place all on the color pink and high-heeled shoes, why don't cha, I thought.

I'm a girlie-girl,  Readers. My wardrobe contains mostly dresses and pencil skirts. My bathroom is overflowing with makeup and floral-scented soaps. Heck, I write a blog about knitting, sewing and other domestic activities, and as a kid, yes, I LOVED Cinderella, Sleeping Beauty, Ariel, and Belle.

I like being a lady. I openly embrace these aspects of my own femininity. Readers, I have to tell you, that it really, REALLY bothers me when someone equates wearing dresses or being feminine with being weak or powerless.

I have to admit that I was a bit too hasty in judging Orenstein. Right at the start of the interview, she makes it very clear that she has no problem with dresses or the color pink.

As the interview went on, I found myself becoming more intrigued and impressed with Orensteins' ideas on the recent Princess explosion, especially her thoughts surrounding raising her own young daughter amongst a sea of glitter, tiaras and sparkles.

She writes that it's not the Disney Princesses themselves that are cause for concern (although she does bring up a few questionable messages that children, both boys and girls, can take from some of the Disney films), but the fact that marketing executives are slapping Disney Princesses on literally TENS OF THOUSANDS of products and hocking them to children of younger and younger ages.

I googled Orenstein's name and came up with a fantastic piece she wrote for the New York Times a few years back:
http://www.nytimes.com/2006/12/24/magazine/24princess.t.html?_r=1

I found it VERY interesting that while Orenstein isn't too fond of Cinderella (When her three year old daughter asks why Mommy doesn't like Cinderella, she replies: "It’s just, honey, Cinderella doesn’t really do anything,"), she LOVES Nintendo's leading lady, Princess Peach. She writes:

I remembered a video on YouTube, an ad for a Nintendo game called Super Princess Peach. It showed a pack of girls in tiaras, gowns and elbow-length white gloves sliding down a zip line on parasols, navigating an obstacle course of tires in their stilettos, slithering on their bellies under barbed wire, then using their telekinetic powers to make a climbing wall burst into flames. “If you can stand up to really mean people,” an announcer intoned, “maybe you have what it takes to be a princess.”

Now here were some girls who had grit as well as grace. I loved Princess Peach even as I recognized that there was no way she could run in those heels, that her peachiness did nothing to upset the apple cart of expectation: she may have been athletic, smart and strong, but she was also adorable. Maybe she’s what those once-unisex, postfeminist parents are shooting for: the melding of old and new standards. And perhaps that’s a good thing, the ideal solution.

I will definitely be reading and blogging about this book.

Hearing that interview reminded me of a study from the University of Bath (which, interestingly, Orenstein mentions in her New York Times article) that looked at how children played with Barbie dolls, and the effect Barbie had on their self image:

I remember having to look over that study (and write a short paper on it) while in college, and let me tell you, Readers, it was quite refreshing to read. I remember playing with Barbies as a kid. I never really "tortured" my dolls as much as the children in the study reported doing, but I did enjoy cutting Barbie's hair and shaving Barbie's legs. I played with Barbie all the time, but it never once occurred to me that my body was supposed to look like that of a plastic doll.

That's because I remember recognizing Barbie as exactly that: a plastic doll, and nothing more.

I suspect that the same findings from the University of Bath study can be applied to the "Princess-Mania" as described by Orenstein, at least as far as the Disney princesses go. The Barbie study just looked at Barbie dolls and nothing else, but in Cinderella Ate My Daughter, Orenstein digs much, much deeper. She explores child pageants, American Girl dolls, Facebook, and a myriad of other things that she feels might have an influence on a child's development.

I am VERY excited to read this book! I just bought it from Barnes and Noble, and as I progress through it, Readers, I will be posting thoughts!

I'm not sure how to
feel when my boss says I am
their Mister Smithers.
Posted by Orb Weaver at 9:34 AM No comments: My brother and his wonderful bride are now married.

The wedding was absolutely beautiful. The flowers were gorgeous, the cake was fantastic, the music was wonderful, the couple was radiant.

My sister and I were given the honor of being in the wedding party. Along with our bridesmaid duties of foofing the bride's train and holding her bouquet, we were asked to read two bible passages that the bride and groom picked out for the wedding ceremony.

I love my sister. She's always been my confidante, supporter, cheerleader, and friend. If there is one thing that I can be sure of, it's that my sister will always, ALWAYS have my back.

With that being said, my sister and I (since, being siblings, were are STRICTLY obligated to do so,) take great pride in driving each other nuts.

This past Thursday, since we had several relatives flying in from out of state, my parents decided to take us all out for dinner for a pre-wedding get together. We went to the Taphouse grill in Seattle, which has an EXCELLENT pescetarian menu (Yup. I'm a pescetarian now. That's a post for another day, though.)

As we were waiting for our meals, the groom-to-be then asked us to read the passages for a bit of entertainment. I opted to go first, (since my verse, 1 Corinthians 13, has been engraved into my brain since the fifth grade). I read the verse, and after a graceful pause, looking up demurely, and gently orating, "The word of the Lord", I sat down with a small flourish. Pretentious? Admittedly, yes. I should have known better.

My sister, with a mischievous twinkle in her eye, then got up to read her verse. Or so I thought.

She stood up,  cleared her throat, gestured toward me, and with a smirk, read:

"We have a little sister.
She has no breasts."

(Readers, this is actually in the Bible. Song of Songs 8:9).

The table erupted with laughter as my sister dodged a container of tartar sauce.

The Good Word is used for many things, Readers. It is used to bring comfort, reassurance, and hope. Sadly, it is also used to bring division and hate.

I'm not sure if our Lord intended for his Word to be used for picking on one's siblings.  One thing is for certain, though, Readers: as we were all laughing our butts off, I'm pretty sure that God was laughing with us.

Until next time, Readers!

Posted by Orb Weaver at 5:53 PM No comments:

It's Delightful! It's Delicious! It's Delovely! 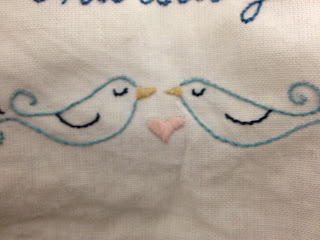 Won't be posting for a while, folks! My brother is getting married in two days, so I'll be performing my bridesmaid duties in lieu of blogging :-P

What I wouldn't give
For a moment of silence
Among the chaos
Posted by Orb Weaver at 9:59 AM No comments:

Readers, I bring you my first snowflake pattern, inspired by my future sister in law. 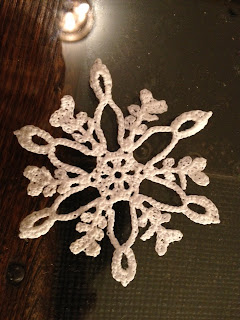 My fiance's sister, Sam, is the epitome of the word "giving". She is a full-time Master's student, and when she's not hitting the books, she works as a social worker for a homeless shelter that serves the needy of Boston.

Sam is also an avid gardener. When she's not busy sowing the seeds of peace and charity, she's growing flowers and vegetables of every kind :-)

This is my first flake! Please let me know, Readers, if there are any problems with the pattern as I've only tested it out myself.

The little "Hearts" are shamelessly copied from the very fabulous Snowcatcher (I worship the ground she bikes on). She lists a great tutorial on the hearts here: http://www.snowcatcherphotos.com/blahg/patterns/heart.html

Cover cardboard with wax (or parchment) paper, tape in place.

Block flake on the cardboard using 12-pt pattern, (google it), pin points and stiffen with whichever method you like :-)

Folks, you can do whatever you like with the flakes you make from this pattern, but please do not republish or sell this pattern. Thanks!
Posted by Orb Weaver at 2:10 PM 4 comments:

*Note: This week's haiku was inspired by the unfortunate incident in West Virginia involving a preacher and a rattlesnake.

Leave that snake alone.
He ain't done nothing to you.
Of course you got bit!
Posted by Orb Weaver at 12:33 PM No comments: