Year of Using Up the Stash: Husband's Gloves

This past week, I've met not one, but TWO project Using Up the Stash goals!

Second, I knit my husband a pair of elbow-length gloves! 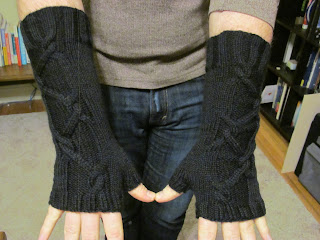 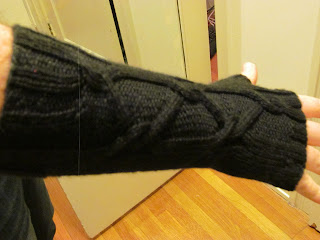 He's been patiently waiting for these gloves since November, and I FINALLY FINISHED THEM! :-D

The gloves were a refreshing change of pace from my earlier projects, which (aside from the Warm Up America segments) were either:

a. Full of complicated and poorly-explained techniques that I had to tear out and redo TWICE before I got the hang of said techniques, (both of the knit Christmas stockings had this problem when I was turning the heel),

b. Knit on size 1 needles, taking FOREVER to finish (I spent at least three weeks on the Chrysanthemum mittens), or

c. Really repetitive and boring. Now, don't get me wrong, Readers. A bit of calming repetition in my knitting has been shown to be good for my nerves, BUT, I get REALLY BORED after making five dishcloths from the exact same pattern.

I'd recommend this glove pattern to any intermediate level knitter! They were a fairly quick knit (I finished both gloves in about a week), and my husband absolutely loves them!

Until next time, Readers! You can look forward to some crochet lace in my next installment!

Note: I am well aware that there is a line running down the left side of both of these images. I'm no expert on camera repair, but I have a hunch that the lens on my trusty digital camera is damaged. Aside from the ever-present line, the camera works fine...and guess who has two thumbs and is a bit too broke at the moment to replace her camera? THIS GIRL!
Posted by Orb Weaver at 7:21 PM No comments:

Haiku Friday: In which I need some silliness

Why on Gods' green Earth
Is Steve Carrel and hyper
Dogs so dang funny?

Posted by Orb Weaver at 9:35 AM No comments:

Humble Jesuit,
the steps of the Fisherman
Proceed you. Take Care.

Posted by Orb Weaver at 8:13 PM No comments:

Year of Using Up the Stash: Mittens!

Yikes! Sorry about my absence for the past week, Readers! The hubs and I have been SUPER busy as of late. I certainly MEANT to take some time last Friday to write a weekly haiku and review CAMD chapter 6, but I....got distracted. Doing....stuff. IMPORTANT STUFF!

I'll tell you what I WASN'T doing...I certainly wasn't playing Final Fantasy VI on our Wii's virtual console until 4 am, so absorbed in the greatest RPG ever made that I lost all track of time.

I DID finish knitting these gorgeous mittens, though! 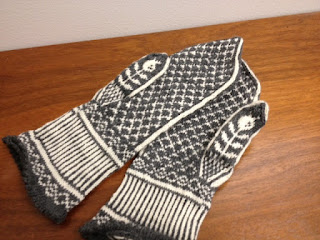 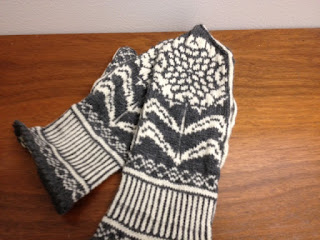 The pattern can be found here, Readers: http://www.knitty.com/ISSUEw11/PATTchrysanthemum.php

I've said it before and I'll say it again. I have a crush on Scandinavian color-work. Absolutely beautiful!

The pattern called for sock weight yarn, so switching out the the super-wash wool for the yarn in my stash was no problem. My only concern is that the sock yarn in my stash is not super-wash (this means that anything knit with the yarn should NEVER be machine-washed. This would make the finished garment shrink).

I'll just pin a note to the mittens that says, "DEATH WILL COME ON SWIFT WINGS UPON ALL THOSE WHO PUT THESE MITTENS IN THE WASHING MACHINE".

Haiku Friday: In which I whine like a little B****

Epley Maneuver,
I think I'm crushing on you.
Here, let's go make out.

Well, yesterday was not fun.

Readers, I have a condition called Benign Paroxysmal Positional Vertigo (or BPPV). I won't mince words: I hate it. I hate this condition with every fiber of my being.

Imagine if you will, Readers, the sensation of being whipped around over and over and over and over. There is no escape from the sensation, no matter how tightly you squeeze your eyes, or how hard you beg God to take the symptoms away. Your head feels heavy, like it's filled up half-way with water, kind of "swishing" to and fro as you make a sad attempt to stagger your way around. You are plagued, Readers, with the illusion of movement; the world spins around and around and around, making you feel as if you were strapped to the hand of some kind of giant compass. The sensation never lasts more than thirty seconds, but it comes back again and again AND AGAIN AND AGAIN, triggered by the most minute movements of your head. Just looking  up into the kitchen cupboard is enough to knock you off of your feet. You are so miserably motion-sick that you can barely move; you just lie there on the kitchen floor, trying desperately to get a grip on reality, begging God to grant you the grace of  making it to the bathroom before you inevitably vomit.

That was my morning yesterday.

As horrendous as the above description may sound, my vertigo bouts as of late are not NEARLY as beastly as they were when I was first diagnosed. A great deal of the improvement has to do with simply knowing what's going on in my ears, I guess. I find that not knowing what's wrong makes ANY unpleasant symptoms exponentially worse.

In addition, my brain has gotten so accustomed to my vertigo that it works double-time to ignore the false movement signals that my inner-ears are sending out. So, instead of having vertigo for a month (you read that correctly, Readers. My first bout of vertigo lasted for an entire MONTH), the symptoms only last for a few days tops as of late.

I find that I get a lot of relief from my symptoms by doing what's called the Epley maneuver. I used to HATE this maneuver tremendously, as it would trigger my vertigo BIG TIME, but if I don't do it at least twice a day while I'm having a bout, my vertigo will NOT get better anytime soon.

I can say with all honesty that doing the Epley maneuver at least four times a day during one of my vertigo bouts has cut my recovery time in half.

Yesterday, after a desperate scramble to the bathroom, I wiped my mouth, brushed my teeth, and pulled myself together as best I could. I called in sick, lied down on my bed, and did the Epley maneuver twice.


Making the world spin on purpose is never fun. But whatever, ya gotta do what ya gotta do.

I was feeling a bit better at this point, so I made myself a Vertigo Nest (several blankets, a puke pail, a bottle of water, and a box of saltine crackers set up in front of the TV) and watched Judge Judy until I was confident that I could get up and walk without falling over. I tidied up the apartment and did laundry, although I had to stop every few minutes to get my bearings.

Compared to how pathetically helpless and fragile I felt when I first started getting these bouts, I'm actually quite pleased with my ability to deal. I no longer sob uncontrollably or lie on the couch all day, feeling sorry for myself. John has also been nothing but wonderful to me as the world would spin; when I was at my absolute worst, he would take my arm and guide me to my bed, to the bathroom, or to wherever I needed to go.

He was my guardian angel during that first bout. He took a day off of his work to be with me, on a day when my symptoms made me particularly miserable. He followed me around the apartment I shared with my older sister, catching me if I lost my balance and pointing me in the right direction ("Honey, here...the kitchen is THAT way.")

Ladies (or Gentlemen), know this. If the man you're dating holds you, his weepy vomit-covered girlfriend, in his arms and tells you that he thinks you're the most beautiful woman that he's ever seen, even when you feel at your absolute LOWEST, you know that you've found The One.

An awesome boyfriend (now husband), sister, AND a great doctor who gave me a volume's worth of information regarding BPPV helped me get through that terrible, terrible first month.

Now, I'm able to get over the worst of my symptoms in about a day. I was able to come into work this morning, albeit a bit woozily. As I'm typing this, my head still feels as if it's half-full of warm water, wooshing around as I turn my head.

I'm sorry, John, but if the Epley Maneuver were a person, I'd totally make out with it.

Orb Weaver out! You can expect another Cinderella Ate My Daughter review, plus a stash-use update, in the coming week, Readers!

Posted by Orb Weaver at 7:26 PM No comments: