John and I: The Siskel and Ebert of Japanese Animation

I must say that things are pretty dang Hickelty-Picklety here in the Emerald City.

I'm currently thanking God that I live within walking distance to my job. I've heard countless horror stories of people losing control of their cars while commuting; and I saw more than one vehicle get stuck on the on-ramps to I-5 while walking on Pine street towards downtown.

Even though it wasn't that big of a deal for me to get into work, (and one of the reasons they hired me here is because I am able to come in during days like this), I can't help but pout a bit in jealousy at my coworkers who were dubbed "non-essential personnel" and who were encouraged to not come into the office. But, somebody's gotta answer the phones and keep an eye on the front desk. So no snowday for Miss Jackie.

It's kind of nice, though, being the only person on the floor. Almost therapeutic, in a way.

Plus, I was able to whip out these amazing gloves: 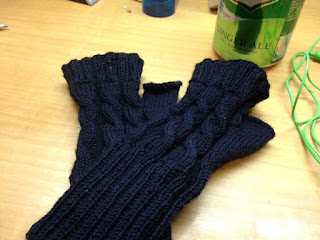 Pattern can be found here: http://illuminknitdesigns.blogspot.com/2011/08/with-twist-of-mustard.html 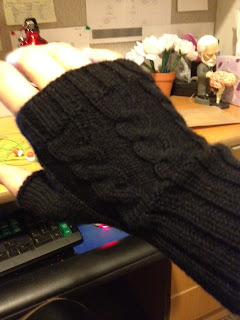 Work aside, it's honestly been kind of nice having the so-called "snowpocolypse". Very peaceful. I've always loved snow (although I hate driving in it), and the sheer vision of my city blanketed in white makes me smile.

My fiance and I have been spending a ton of time at my apartment, needless to say. Everything in this town is pretty much closed down for the time being. So, we got onto netflix and watched A LOT of anime.

It's interesting watching animated films with a person who animates and illustrates for a living.


As we were watching, we came to the following conclusions about the various animes in existence:
1. Naruto Shippuden, when in line with the actual manga (filler doesn't count), is not nearly as bad as a lot of people make it out to be.

2. Outlaw Star and Cowboy Bebop are two of the finest shows ever made.

3. Miyazaki films are amazing, but tend to have a strange vibe because none of them really have an established antagonist, and if they DO, the antagonist's backstory is pounded into the viewer's head so that EVERY character can be related to.

4. ALL of the creators of FLCL must have been under the influence of SOMETHING while writing it;

5. Rurouni Kenshin was great...but kind of fell apart after the licencing issue that lead to "Samauri X," which was a different artist and just wasn't the same.

6. The Japanese versions of Sailor Moon WERE NOT OVERLY SEXUALIZED. People need to keep in mind that Sailor Moon, like most animes, was written and intended for teenagers and adults, not small children. I mean, COME ON! They never show REAL nudity (getting rid of the OUTLINE OF THE BUST FIGURE? ARE YOU KIDDING ME?), the most touching and defining moments of the series (like "Day of Destiny") were censored in the US because they were deemed "too innapropriate for children", again, THIS WAS NOT MEANT FOR CHILDREN YA BONEHEADS! And, people need to just accept the fact that HOMOSEXUALITY HAPPENS. Yeah, there are a lot of people who don't agree with it, but it happens. Making Sailor Uranus and Sailor Neptune "cousins" didn't fool anybody, and if you ask me, just made it WEIRDER...in the English version, it almost implied incest!
7. On a side note, we both came to the conclusion that we, should we decide to procreate, would rather explain to our children why the two men are holding hands or what a nipple/breast is than explain why a character is stealing cars and shooting people.

Another fabulous thing has happened througout this snowfall as well...I have yet again been struck with inspiration! Readers, you can expect a Sailor-Moon themed knitting project next, that will be all class without being cosplay!

Enjoy the snow, fellow Northwesterners!
Posted by Orb Weaver at 6:40 PM No comments:

All right Readers...at last an update on MY knitting projects!

I've decided to try and be a bit more daring when it comes to choosing which knitting patterns to make. As many of you can guess, based on the fact that I haven't posted ANY projects since November, I've kind of been stuck in a knitting/crochet project limbo.

Firsties, I whipped out some of my dishcloth cotton and learned how to do the "blackberry" stitch, which turned out quite well: 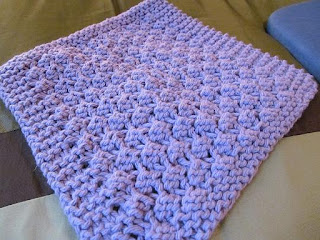 The pattern I used for this one can be found here:
http://littlehouseinthesuburbs.com/2008/10/knitted-dishcloth-pattern-1-blackberries.html 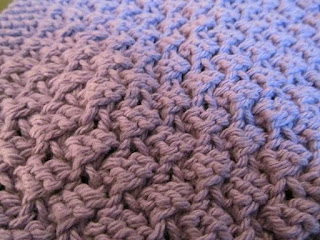 I'm very pleased! The pattern, for a dishcloth, was a bit more complicated than I'm used to, but the results were beautiful. I MIGHT use this pattern for a purse later.

Secondly, I finished a project that I started way back in October...this lovely "ribbon lace" scarf: 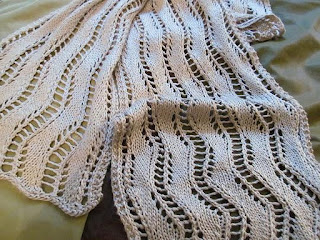 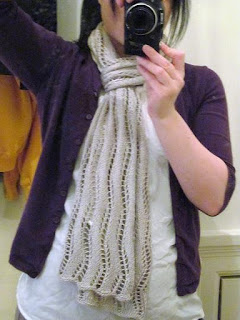 The pattern came from one of my all time favorite knitting resources: "knitty"!
http://www.knitty.com/ISSUEspring08/PATTlaceribbon.html

I am SO HAPPY with how this scarf turned out! I've knit scarves, but many of them have either turned out to be too chunky, too short, or just too boring. I used the same yarn on this scarf as I used for the "Liesl" coin purse I posted a while ago, and it turned out simply fabulous!

Speaking of the "Liesl" coin purse, I'm almost finished with a Liesl 2.0! 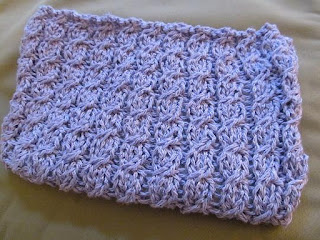 The photos simply don't do this project justice. ﻿I spent a long time looking for a good lavender/lilac yarn that had a good texture, and found this imported Italian cotton blend (with little sequins weaved in!) at the Craft Warehouse in my hometown! The purse so far is so stinking amazing that I can't seem to stop thinking about how AWESOME it's going to be once I finish the zipper, wristlet and bow! 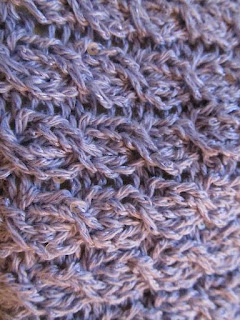 Instead of eyelet lace, I decided to go with mini cables. I'm definitely going to put a small bow on the purse, but this will be a part of the wristlet/zipper instead of the main part of the purse itself. This purse was much more challenging to make than I thought it would be; the mini cables themselves were simple enough to knit, but the YARN itself was the most delicate yarn I've ever worked with! Plus, the sequins, which added a much needed touch of modern glamour and sparkle without looking too "out there" and tacky, seemed to bunch up and get caught on just about everything.

Also, Readers, check it out: 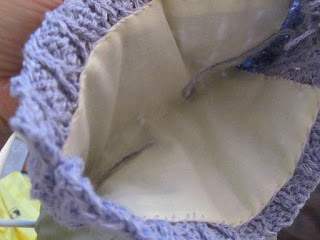 Along with these projects, I'm embarrassed to say that I'm still working on a few things...that I wanted to have finished a year ago! I'm STILL working on the draft dodger Caterpillar...but at least, I have the materials, pattern, and embroidery design for the finishing touches.

The "space invaders" afghan is also still being worked on. While the main part of the blanket is finished, I still have yet to do the "back" of the afghan to cover my faire isle floats. My fiancee, that sweetheart, who knows me to be a bit of an ADHD ninja with the attention span of a goldfish, has given me an incentive to finish it: He said that he wanted it to be his engagement present from me! <3

So, Readers, I guess I have nine months to finish it!

Orb Weaver out!
Posted by Orb Weaver at 2:15 PM No comments:

My life is complete.

...Because a television show about baby sloths exists.

Good Afternoon, Readers!
If there is anything that I have to say regarding the past couple of weeks, I suppose only two words come to mind:
Holy. Crap.

Yes, Readers...as some of you may have guessed based on my previous post, John proposed!

We got engaged on December 28, 2011. We have decided to get married September 2012 in Gloucester, MA.
It's amazing how quickly things are going in regards to wedding planning. It's only been about two weeks since we announced the engagement, and already we have the church, officiant, and venue booked, and we also have a good idea on what kind of flowers and which caterer we want.

I'm getting the feeling that this is NOT normal...so far, things are going quite well...almost TOO well. Granted, I'm trusting A LOT to my future mother and sister in law, given that we're planing this wedding from about 2,000 miles away, but since they both have IMPECCABLE taste, I'm not worried.

On a side note, it has been brought to my attention that my blog is becoming less and less of a knitting blog and more and more of a personal thought doodle blog. Not that there is anything wrong with thought doodles, but I do feel that I should keep the majority of my posts knitting/crochet/embroidery related.

So Readers, on that note, I bring you...WEDDING KNIT AND CROCHET!

We will begin, readers, with a darling crochet "wedding cake" that serves a double duty:
1. It looks stinkin' adorable, and
2. It acts as a cozy/cushion for stacks of china, keeping away chips and cracks!

I just may get to work on these anigurumi lovebirds and use them as a decoration for the head table:

And lastly, I give you...the Royal Wedding...in KNIT FORM!