A sad, sad day for us Capitol Hill folk...

I just found out that the M street market, which has faithfully supplied me with coffee, avocadoes and Cinnamon Toast Crunch is closing its doors.

There is a notice taped over the counter by the cash register that gives the full story. Apparently, the landlord of the building wanted them to pay a highger rent but they couldn't afford it.

It makes me sad to see that little supermarket go...I rarely go there to do any big grocery shopping trips becasue of its higher prices, but if I was in a jam and REALLY needed an egg or milk or whatnot, they were always there for me. Plus, I just liked the urban ambiance the shop provided, and the grilled sandwiches they would sell during the summer on Wedsdays.

Bye, M street market! We will all miss you!
Posted by Orb Weaver at 4:30 PM No comments:

Having a lot of time on my hands tends to open up my creative side like none other. I've been working on an afghan, based on the space invaders game...not too terribly original, (there are a ton of space invader themed projects on ravelry) but it was a lot of fun to make and is a ton of fun to look at. I'm halfway finished; the little "invaders" are all done but I still have yet to make the back of the afghan so that the loose strings on the other side of tha pattern don't show or get tangled up. 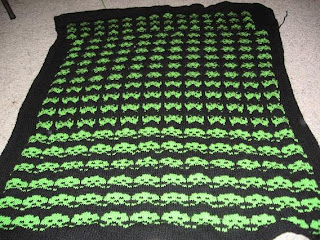 Its also a bit small for an afghan; its about the size of a crib blanket or a large wall hanging. If anything, it will sit and look cute on our couch for now untill it's completely finished. I'd love to start selling things like this on Etsy; my father has already taken a keen interest in helping me price it properly and market it properly; since there aren't many other "space invader" knit items or housewares on Etsy at the moment, it might be sold reasonably quickly, as long as I promote it properly.
My kitty loves the afghan. I've definately got to wash it before it's ready to sell; I've pulled some black kitty hairs from it already <3 ﻿ Other than knitting, I've also started doing some more embroidery. I stinkin love embroidery, its so easy and full of instant gratification as a craft project. I ordered a reusable grocery bag a while ago from Sublime Stitching (which I ADORE), but haven't had the time to properly print and decorate it. One of my favorite patterns is the dutch/russian pattern, with the little matroyshka dolls. 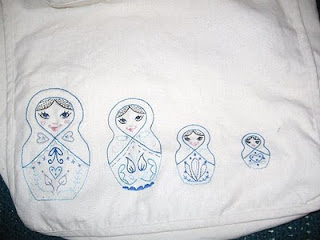 They didn't come out all even, but I was too impatient to wash the bag and print it again. Done all in blue because I had an excess of blue embroidery thread <3

I also started another embroidery project. I've always wanted to get a little bit more in touch with my family's Russian heritage; and surrounding myself with Russian kitch doesn't always help create an accurate representation of where I come from. When my ancestors came here from Russia and Belarus, I'm pretty sure that a matroyshka wasn't exactly important or significant. However, I know that religion was very important to my ancestors; who were probably either Catholic or Russian Orthodox at the time. I found a lovely translation of the Lord's Prayer, and I'm transferring it to a nice rustic looking fabric. I'm still in the process of copying the letters onto it; My handwriting is terrible and I don't trust myself freehanding it just yet. 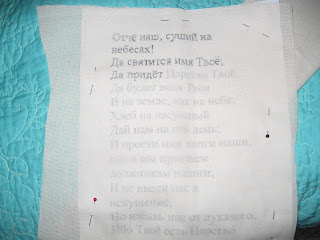 I have, however, had the privelege to become (somewhat) close to the Russian community in Seattle. I worked at a small Russian bakery/resturaunt for about six months, and working so close with my boss, who was from St. Petersburg, gave me a small insight to my family. She insisted that I not call myself a Russian girl untill I was able to make Piroghis and Pelmenis (little Siberian dumplings that are a Russian staple), which I have learned and have done. I've made a few myself, but they are nowhere as good as my boss's; seeing as I don't have a proper meat grinder or pasta maker. When I make them again I'll post pictures <3

I'd also like to learn some more of the Russian language. While working at the restaurant I learned a few words, "Thank you," "Welcome," "Hello" and "Good-bye", and such. It's been such a long while that I've certainly lost a great deal of it; I used to know "Can I sweep behind you?" or "What do you need?" from listening to my boss or the other fluent Russian-speakers.

Now that those are somewhat finished, I've turned my attention to a few other things: other than finding another job and volunteering at the hospital, I have found myself with a great deal of time on my hands. I'm probably going to just hunker down and properly study for the GRE, which I have been putting off for a while...my seemingly endless "Peter Pan" complex is rearing its ugly head, as it usually does when I'm faced with a significant life change...Mary Martin's unforgettable line , "I WANT TO ALWAYS BE A LITTLE BOY AND TO HAVE FUN!" tends to come to mind.

All the same, the simple truth that I need to stop pretending to be young and naiive in the ways of the world (and Psychology) in order to attain my long term goals in life tends to be louder than my inner Peter Pan.

No matter how seemingly mature I get in the world of Psychology or Academia, however, I still plan on retaining my love of all things goofy and adorable. My boyfriend and I have been watching the HBO series "John Adams" with Paul Giamatti, and I have been playing "Kirby's Epic Yarn" on the wii for the past couple days. This leads to some interesting dreams... 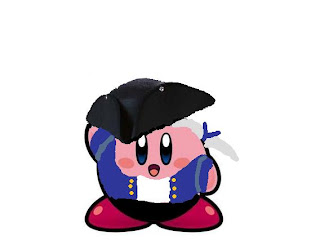 I have created. I have knit, purled, increased, decreased, cast on and cast off, picked up stitches and dropped them...and I have finally finished it.

I have knit my first sweater. 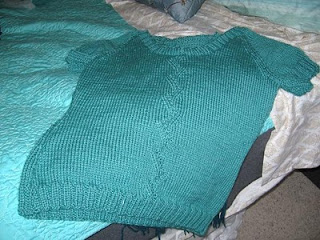 The sweater has yet to be blocked. Gonna use the steam block method. Hoo yeah, its great to finally know what that means :-)

I posted earlier that my downstairs neighbor has requested a draft stopper in the shape of a blue catterpillar. I found a good pattern that I think I can alter, its the free Red Lion draft stopper pattern
http://www.lionbrand.com/patterns/60492A.html?r=1

Its a nice, easy thing to make, but there will be some changes... 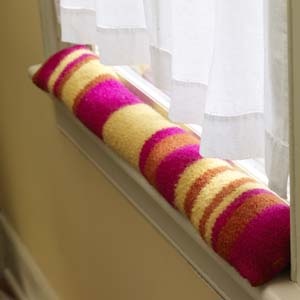 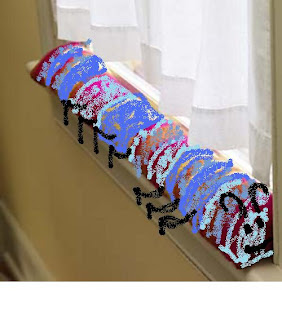 will post as the little dude progresses.
Posted by Orb Weaver at 2:15 PM No comments:

Finished a bunch of stuff :-) Had a wonderful holiday, full of love and support from my family and loved ones!


Finished the socks. As I feared, I ran out of the light grey yarn...my local yarn shop (Stitches on Broadway, which is AMAZING by the way) had the same brand but not the same dye lot. Boyfriend had one sock with a different colored toe. They finished up nicely other than the color work, and they ended up fitting great. 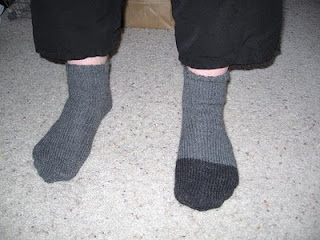 I've also finished the strangling vine scarf for my co-worker. It ended up being a bit short, but it's a nice scarf and was so pretty when I finally got around to blocking it. ﻿ 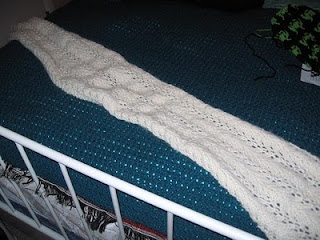 For Christmas this year, my mother gave me a wonderful knitting tote, and filled it full of yarn. I have recently discovered the Stitch Nation brand of yarn and began knitting the Cream Puff Pullover from the Stitch Nation Collection 1 book by Debbie Stoller. That woman is my hero; I've learned so much from the stitch n bitch books. ﻿ 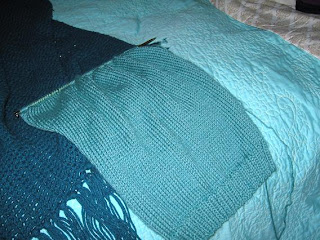 I'm about 80% finished with the back of the sweater, I'm quite pleased with it so far.
This is my third attempt at knitting a sweater; my first sweater was the cloverleaf lace "lucky" sweater from Debbie Stoller's Stitch 'n Bitch Nation. It turned out terrible; bulky, not fitting right, and needing a ton of tweaking in order to be even wearable. I understand that other knitters have had troubles with that pattern too; but the summer I spent working on that sweater was a ton of fun. I love knitting lace, and the cloverleaf pattern was so easy to learn. Hopefully this sweater turns out better!
And lastly, I give you, fellow wanderers of the endless blog-o-space...nerdy faire isle. 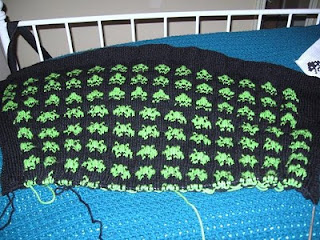 I've posted earlier about my pride in learning faire isle with the zelda bag, but nothing helps me to learn and master a new technique like making something BIG with it. I sat down with my brother this Christmas and he taught me how to use Microsoft Excel in regards to making knitting charts. Making pixelated images is so easy now, no more coloring in old graphing paper!

I'm excited for the space invaders afghan; I'm thinking about opening up an etsy account. I'm going to knit a back to this afghan in all black to cover the "ugly" side of the faire isle. Will post more pictures as the project goes on!

Another gift that a close friend and neighbor gave to me this year is a cool knitting book, "Yummi 'Gurumi" and a whole box full of Sugar 'N Cream cotton. The book is full of cute anigurumi patterns, my favorite are the fruit patterns. I have so much cotton, I know that I'm probably not going to use it all. I'm gonna have to come up with something creative to use it all up, but there's nothing quite like knitting a ton of dishcloths to make up the difference!

Posted by Orb Weaver at 1:55 PM No comments: