At long last, Readers! We finally have a snowflake pattern!

I've been playing around with the idea of incorporating a "feather" kind of design into one of my snowflakes for a while now, ever since I saw the movie "Black Swan". While I did have a great appreciation for the film's dark and horrifyingly accurate exploration into the head of a poor woman suffering from schizophrenia, my inner five-year-old squealed with delight and was FAR more interested in the beautiful costumes.

The feathers, the beading, the little "coronets" in the center, are all an homage to the graceful (non-schizophrenic) Swan Queen character. 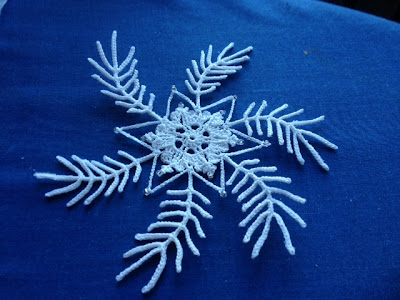 String all beads onto your thread.

Pin and starch, using a 6-point pattern for reference.

Crocheters, you may use the flakes you make from this pattern in any way you like, but please do not sell or republish the pattern. Thanks!

Year of Using Up the Stash: ERHMEGHERD BABY SOCKS

Wow! It's been a while since I've updated you all with my knitting escapades, Readers!

Those of you who've been following me will be pleased to know that I've finished the socks: 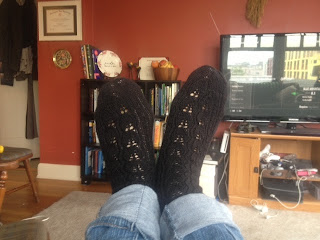 Beautiful pattern, and a reasonably quick knit too! 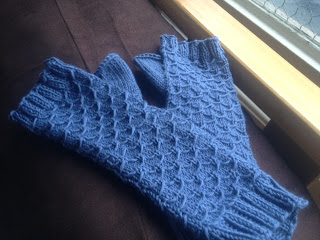 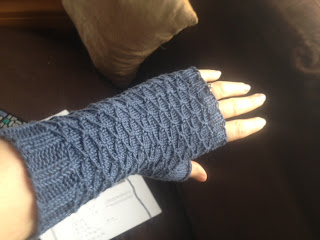 She absolutely loves them! Now to pick a second pattern for pair number two!

I also started working on this wonderful thing: 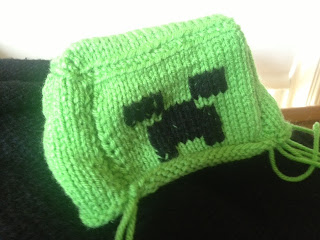 I was looking for something to use up the rest of my bright green acrylic, and came across a fabulous pattern for a Minecraft Creeper doll! I finished the head up just fine, (not bad for my first attempt at the duplicate stitch), but I find that I'm struggling with knitting the body. The pattern is a mite bit confusing in the way of attaching the rectangly limbs to the body; I'm going to give the body a few more attempts, but if I'm still messing it up after a few tries I may just wing it.

A while ago, a good friend gave me one of the "Jane Austen Knits" magazines, and I found a gorgeous pattern for a re-usable grocery bag. I've used up all of my purple wool blend on the bottom/body of the bag, and I've used up nearly all of the chunky gray wool for the top of the bag: 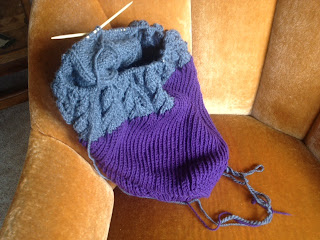 I still need to do more of the lace pattern on top, as well as the straps for the bag. I'm going to use a chunky dark purple for that; it may not be the prettiest thing to come from my knitting needles, but it's certainly going to be one of my most useful projects, given Seattle's plastic bag ban.

Lastly, I have the perfect use for (at least a good chunk of) my sock yarn! An old high school friend of mine just gave birth to a beautiful little girl, Readers! You guys know what that means.... 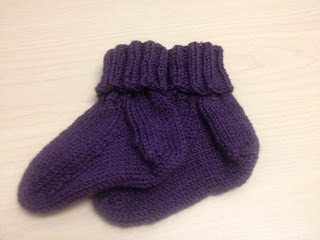 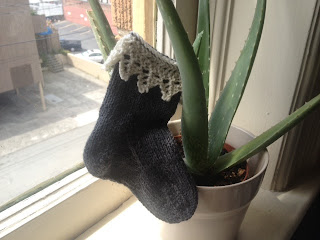 My word, Readers, baby  booties are so much fun to knit! It's like instant knitting-project gratification! I finished both of the purple booties in one day!

So, Readers, here is my list of my current projects to help keep me on track!

1. Baby booties: Purple 2/2; Gray with lace trim, 1/2
2. Minecraft Creeper: Head: finished. Body: still working on attaching the feet.
3. Grocery bag: About 3/4 of the way finished!
4. Pop's gloves: Need to pick out a pattern and get started!
5. New Snowflake Pattern: We've got a title! New snowflake, I dub thee: "Odette/Odille!" Still working on two prototypes; "Odette" is crocheted in all white, and "Odille" is crocheted in all black.
6: Space Invaders Warm Up America Square: Not even started yet, heh. I'll start that one as soon as I finish the Minecraft Creeper; that little guy is capitalizing on all of my bright green yarn.