It finally hit me this morning at around 7:15 am, Readers, as I was groggily scooping the grounds into my french press for my morning coffee.

I am no longer a girl. I can no longer call myself a girl. Heck, I can't even say that I'm in my mid-twenties anymore. I am 26 years old, which officially puts me into my late twenties. Yikes.

I sat down, poured a bit of vanilla coffee creamer into a mug, and waited for the chocolaty-brown mixture in the glass cylinder to steep.

I looked around my apartment, which, even by my usual unorganized standards, was jumbled and messy. Just ten hours before, I was overcome with the urge to reorganize my walk-in closet and two sets of dresser drawers. The wedding is coming up, and John and I will be moving in together soon. It was time to clean out the things that simply wouldn't fit into my new life (or new apartment). The small bench-like table at the foot of my white iron bed frame, along with the area of carpet around it, was morphing into a fabric/leather city-scape of sorts; towers of clothing and shoes that were designated as "keep", "donate", or "scrap material", were towering higher and higher, threatening to topple over if not dealt with.

I rubbed my eyes and sleepily grabbed an old reusable shopping bag (one that was starting to show wear and probably wouldn't last much longer), and started filling it with old shoes, being careful not to overfill it. Wouldn't want the bag to rip open. Or the handle to snap off. Or have a stiletto poke through the flimsy material as I'm walking toward the Lifelong Aids Alliance donation center. That wouldn't be good for the shoe OR the carrier of the bag.

As I was delicately placing each shoe in the bag, I started to notice how my taste in footwear has drastically changed during the past three years. The zebra-striped peep-toe stiletto heels went. The coral pink Ivanka Trump leather pumps stayed. The shiny silver snakeskin platform sandals with the zipper front went. The red TOM's canvas shoes with the leather sole stayed. The chocolate brown UGG boots went. The mustard yellow faux-leather pointed-toe flats stayed.

The worn material of the canvas bag began to pull dangerously. No more shoes in here. I looked around at the other items that I had earlier deemed unworthy of my apartment, and picked out lighter, fluffier things I could fill the bag with. A plush Care-Bear that I won playing the claw game during a road trip to the coast. A Princess Peach doll and a Naruto ninja headband, both bought at the 2006 San Diego Comic Con as souvenirs. A turquoise blue camisole that had a small bleach stain on it. A white fleece blanket that was taking up space. A few plastic ponies that I knew I could part with, and that would find homes with collectors within a week (collectors of 80's nostalgia are everywhere on Capitol Hill). A blue plastic Sleeping Beauty tiara, bought at Disneyland. Two goofy t-shirts that I bought a couple of summers ago to wear during my brief stint as a "Video Game Advisor" with GameStop, one that was electric yellow with Pikachu's smiling face on it, and a powder blue one featuring Navi the fairy, fluttering below a talk bubble that declared, "Hey! Listen!"

By now, the coffee was about to get cold. I took a break from filling the "donate bag", and poured myself a cup. The brew was stronger than I was used to. I won't let it steep as long next time.

My workday doesn't start until 10:30. I could be sleeping in, if I wanted to. But I like being up early. I like the peacefulness of Seattle during the early hours of the day, when people are just waking up and the streets are relatively quiet, save for the occasional seagull or car passing by.

I added some more coffee creamer to the cup, to try and soften my coffee's unusually bitter taste.

As I sipped on the morning brew, waiting patiently for the caffeine to course through my veins, I leaned back in the small wooden chair and considered the bag of shoes/clothing/toys that are about to leave my life. And I smiled.

I am a twenty-six year old woman. One who has once went out dancing in zebra-striped peep toe stiletto shoes. One who has sold video games while wearing a Pikachu t-shirt. One who has been to the Comic Book Convention and seen Stan Lee get escorted to his keynote by eight guys in storm trooper costumes. One who had actually WON something from one of those evil claw machines.

It's a hard thing to put into words, Readers, what exactly was going through my head as I was looking at that bag. I was feeling nostalgic and sentimental, but I was also glad to see the things go. I'm a professional woman. I'm a receptionist, yes, but a professional woman just the same. I am a choir director. I am an activist. I am a blogger. I am about to be a wife. As of now, I have no need for cosplay pieces, Disney Princess tiaras, ridiculously provocative shoes, or toys. I like them. I am VERY glad that I once had them. But, in the grand scheme of things, I no longer have the need for them.

Memories are more precious than any possession, piece of clothing, trinket, or toy. And, memories do not take up shelving space or gather dust.

I got up from the table, showered, and dressed for the day. Black stockings, mustard yellow dress, black belt, eggplant purple cardigan, navy blue blazer.

This "Wild Rose" is happy to be domesticated.

I finished dressing, and moved into my living room where I have my vanity set up. As I pulled my hair back and applied my make-up, I looked over and saw the files organized in my bookshelf, labeled, "2011 taxes", "401K info", "Insurance Forms", and "Grad School Apps".

I'm not going to lie, Readers. I will occasionally look back and wish that I could be a young, wild thing, or an innocent girl who can be taken care of, forever. Still, the truth is that I'm settling down. I'm going to be starting my own family. I will be a mother someday, and need to be strong in order to help my own child grow and be a part of the world.
However...

I will always keep a little bit of the Innocent Girl and the Wild Rose close. 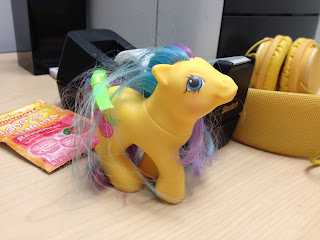 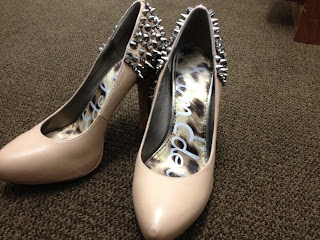